Halloween is nearly upon us, so let’s take a look at some of the most legendary cars from our favourite spooky movies. From the Chevrolet CEO in Jeepers Creepers to the world-renowned Batmobile driven by Batman himself, here’s our run-down of the top 7 famous Halloween cars. 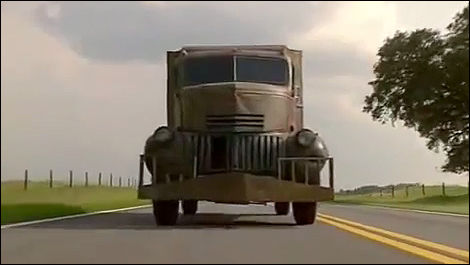 In the movie Jeepers Creepers, The Creeper drives a rusty Chevrolet COE. The truck is used to track down two siblings, which it is determined to eat. In the movie, it featured a personalised registration plate with the message ‘BEATNGU’. Over the past couple of decades, this has become one of cinema’s most-recognised Halloween cars. The movie came out in 2001 in the UK, turning Justin Long and director Victor Salva into high-profile names.

Featured heavily in 2004 zom-com Shaun of the Dead, this car played a pivotal role in the movie alongside stars like Shaun Pegg and Nick Frost. A hit on both sides of the Atlantic, Shaun of the Dead grossed $30 million worldwide despite only having a budget of $6.1 million. Many of the actors in Shaun of the Dead also starred in the late 1990s Channel 4 sitcom Spaced. The movie is part of a trilogy alongside Hot Fuzz and The World’s End. Legend has it that it was originally entitled ‘Tea Time of the Dead’.

This duo featured in the Quentin Tarantino slasher movie Death Proof. The vehicles were part of a car chase near the end of the movie when a dangerous stunt known as the Ship’s Mast also took place. The main character in the movie was an ex-Hollywood stuntman who enjoyed using so-called “death proof” vehicles to target his victims. The movie starred Hollywood aristocracy including Kurt Russell and Rosario Dawson.

This vehicle stars in the film Christine, which is also the name of the car itself. The car embarked on a series of killings in the movie, including that of a school bully and his acquaintances. The film was based on a book penned by Stephen King. The car has a mind of its own, with a jealous and possessive streak! It made $21 million at the box office in the US. 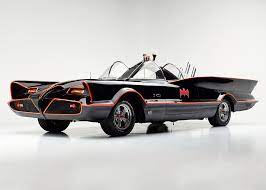 Next in our list of the top 7 famous Halloween cars is the Batmobile. The vehicle from the Batman movies was originally based on the 1950s Lincoln Futura concept car. This fictitious car has been armed with a whole host of exciting gadgets over the years, including flamethrowers, Bat-Bolas, smoke capsules and stun guns. The Batmobile is surely one of the world’s most famous cars, appearing in every Batman iteration, from movies and TV shows to comic books and video games.

This car features in several Evil Dead movies as well as many other titles directed by Sam Raimi. It first appeared on the big screen back in 1991. In the Evil Dead movies, it is driven by Ash Williams. Other movies that the car has been used in include Drag Me To Hell, Spiderman and Crimewave. The fifth movie in the Evil Dead franchise, which is said to be called Evil Dead Rise, is due in 2022.

An iconic symbol from the Ghostbusters franchise, this car is the main vehicle used by the leading characters. According to reports, the movie was originally going to be titled Ghost Smashers and was set in the future. Reports also say Bill Murray made no money from the original movie, with Eddie Murphy being originally earmarked to play Winston. The original Ghostbusters movie also spawned a huge hit single of the same name, performed by Ray Parker Jr.

We hope you enjoyed our run through the top 7 famous Halloween cars. At Wyatt Auto Services, we have worked on some of the most prestigious vehicles in the UK. We are one of South Yorkshire’s leading local independent garages and always go the extra mile to deliver customer satisfaction. We offer same and next-day MOTs, full and interim servicing, and some of the most competitive prices in the region.

A local, friendly and competent service

We are a local family-run business that’s able to provide the valuable personal touch so many big-name competitors cannot. You can count on us to provide you with in-depth advice on maintenance so you can prolong the life of your vehicle. We can work on models from all the leading manufacturers, always using official parts where possible to maintain your warranty. Many of us customers have been using our services for many years.

Part of the Good Garage Scheme

We are proud to be a member of the Good Garage Scheme and pride ourselves on our outstanding reputation. Serving motorists across Barnsley and surrounding areas, we do all we can to ensure your car is safe, roadworthy and legal to drive. We carry out all of this work at our fully-equipped auto centre in Wombwell. Our auto centre has all the equipment that we need to meet your needs, with our highly experienced mechanics offering a wide range of services, including DPR cleaning, tyre-fitting, brake and clutch replacement.

Get in touch Feel free to contact us at your earliest opportunity if you do have any queries about the services that we offer, including car servicing in Barnsley and Wombwell. You can reach us today by giving us a call on 01226 979 087. You can also get in touch by completing the simple form on our website. We’ll contact you as soon as we can. We can answer all your questions and provide you with a competitive quote for the service you require.